The rise in popularity of video games has led to a surge in online only gaming, live streaming, and esports. These new gaming trends require massive data transfer that has created an urgent need to provide faster internet speeds and low-latency to gamers for a seamless online experience. The impact of these technological improvements does not stop with the gamer, rather, it changes the entire landscape for game development in the future. From more realistic VR and AR, to development for 8K and full cloud gaming, the future of the gaming industry relies on internet technology paving the way.

At E3 2019, the story of how 10G can power the future of gaming was front and center at the 10G Gaming Lifestyle Pavilion. The Atlanta Reign, in the Overwatch League, paid a visit for a Q&A on the need for 10G speeds in games and esports. The conversation included pro players Gator and Kodak and Reign coach, Casores. Hosted by ELEAGUE TV’s Malik Forte, the players discussed how faster internet powers their gameplay and careers, the life as a professional player, in-game meta, and the future of gaming. 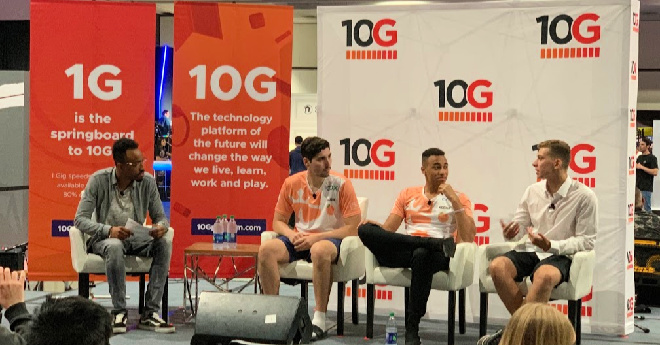 The Reign players are at the forefront of professional gaming, interacting online and in-game on a daily basis. When discussing how faster internet speeds and broadband availability affects the team in a professional space, Casores said, “Upping the level of internet speed is great for us because we want to play at the top level and really see how high we can go. The faster download speed lets us to perform better and better.” The Atlanta Reign Q&A brought a crowd of gaming enthusiasts, esports fans, neighboring exhibitors, and members of the press who were interested in learning more about 10G, concluding with a meet and greet where fans were able to get autographs and take photos with the players.

Throughout the week, the story of 10G carried throughout E3. Hundreds of gamers stopped by the 10G Gaming Lifestyle Pavilion to express their interest and excitement for what they could do with 10G internet speeds. As the broadband industry ramps up its development and testing of 10G, gamers are excited at the prospect of having seamless online gaming, live streaming, and a new way to play via cloud gaming in the near future.

Get the latest information on the progress of 10G.